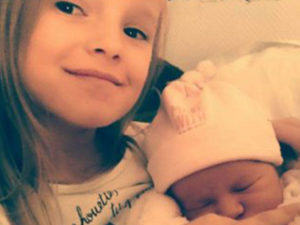 My name’s Aurélie and I have 2 girls, Sasha and Ella. We’re living in Belgium.
In December 2016, when Ella was 5 weeks old, she was diagnosed with lipoprotein lipase deficiency. She was initially hospitalized for what the doctors thought was gastroenteritis.
But they soon realized that it was not that. Ella’s condition deteriorated very quickly, the doctors were completely lost and could not find what she had … It was very difficult because we felt so helpless, and even the doctors confessed that they did not know what to do. It was very difficult and I really believed that my daughter was going to die …
Ella had a very thick blood, with a weird color like “strawberry milkshake”. The lab machines could not analyze it because it coagulated too quickly, and the doctors did not explain this phenomenon.
After two days of stress, medical examinations that gave nothing but were so difficult for our little baby, the doctors transferred us to a specialized university hospital for children in Brussels.
Far from home, far from Sasha who did not understand why she had to spend the holiday season with her godmother, without her parents and her little sister, when we had planned to spend them all together. This period has been painful for our family.
After two days of new examinations in the hospital, their more sophisticated equipment showed that Ella was suffering from acute pancreatitis, and the doctors deduced with the results of examinations, that she suffered from a deficit of lipoprotein lipase.
Words that we did not understand at the time, and that we were so scary at first. Serious genetic disease? 1 case out of 1 million? Very rare ? No known cases in Belgium?
What did it mean for our baby? Would she die? How was she going to live? Suffering ?
I thing that in my whole life I have never been so sad or torn as at that moment. Even if it is not our fault, we feel guilty. And it’s really painful, especially since I had to stop breastfeeding my daughter, while it was so close to my heart !! How can we accept that our own milk poisons our child’s organism, without feeling guilty?
After three long weeks of hospitalization, we returned home. And our little family has been trying since that day to live a normal and fulfilling life. Ella is now 6 months old, followed regularly (once a month) by a pediatrician specializing in metabolic disease and a pediatric dietitian. Together, we see the progress our small baby makes, its growth and its weight curve are normal despite a very strict diet. Its triglyceride level remains “manageable” at this time. We hope that everything will continue to go as well …
And often, I sometimes wonder about his future, how will this happen? Will she accept her illness? What if one of these little classmates gives her a biscuit? And if later, in her adolescence, she decides to be rebellious and eat what is not good for her? What if she wants to have a baby? All these “and if”, which for the moment remain unanswered …
I am happy to have found your website and to have read your stories, it reassures me a little and allows me to see a more fulfilling future for my little girl.