The varying physical symptoms of FCS including pancreatitis, the cognitive symptoms associated with FCS, the increased risk of diabetes for people with FCS and how FCS can impact pregnancy.

FCS is an invisible condition. Although often looking healthy, people with FCS can be living with many symptoms which diminish their lives.  Because individual symptoms can be attributed to other causes, people with FCS often don't get the support that they need and many can suffer for years without a correct diagnosis.  The symptom burden experienced by the individual can be very varied, probably dependant on which specific gene mutation the person is carrying.

The most common symptom is abdominal pain which can be  mild, or severe.  It is felt in the upper central region of the abdomen (the epigastric region) and can sometimes radiate to cause back pain. 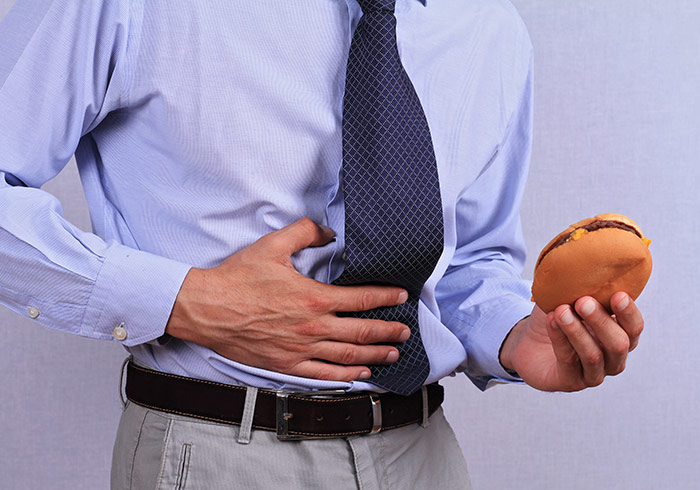 The most serious of the symptoms of FCS is pancreatitis caused by the build up of chylomicrons. Pancreatitis can be life threatening.  Acute pancreatitis happens when the pancreas inflames and causes pain, sometimes intense, which is felt in the upper left side or middle of the abdomen.

In extreme cases people with FCS can have most or all of their pancreas removed.  This results in diabetes and the necessity of being on a daily regime of creon, a combination of three enzymes made by the pancreas.

Other symptoms of pancreatitis are nausea, sweating, chills, weakness, clammy skin and mild yellowing of the skin or whites of the eyes (jaundice).

Steatorrhoea
Other problems include a hardening of the pancreas due to the accumulation of calcium salts (pancreatic calcification) and stools containing an excess amount of fat so that they are frothy, foul smelling and tend to float. Being unable to control ‘the need to go’ is often described.

Lipaemia retinalis: Opthalmologists (eye specialist) can often spot raised triglycerides during eye checks. Raised triglycerides in the blood stream may make the small arteries (arterioles) and small veins (venules) in the outer parts of the retina and the back of the eyeball (fundus) appear pale pink. The changes do not affect vision and are reversible.

These raised, reddish-yellow bumps or nodules appear on the skin and are usually found on the buttocks, knee and outer arms.

Also known as ‘fat spots’ these affect approximately 50% of people with FCS. Usually they measure around 1mm but they can form clusters and grow together to form larger lesions.

They are usually not painful or tender unless they are on an area of the body where they are constantly knocked or rubbed.

Eruptive xanthomas usually appear within a few days after triglyceride levels are increased (each patient will have their own ‘tipping point’). They may contain a greasy, yellowish substance and sometimes a milky fluid.

Cognitive and other symptoms

As well as the physical symptoms, people with FCS can also experience many symptoms that affect their brain function.

Managing the restrictions imposed by FCS can be very stressful. Many people with the condition become depressed, and many feel socially isolated.

People with FCS are at risk of eating disorders. Many report fasting for several days to manage pain, others report self-induced vomiting to avoid digesting any food eaten with a high fat content. This can escalate to bulimia.

Less energy and less stamina than their peers, and feelings of fatigue (beyond feeling 'very tired') are mentioned often.

High cholesterol: many people with FCS have high cholesterol levels, however it is unclear if this is as a result of their FCS or due to secondary factors such as diabetes.

Approximately 15% of people with FCS develop diabetes, usually in middle age. Diabetes occurs because of insulin resistance caused by eating a diet high in carbohydrate and sugar, or through insulin insufficiency due to damage to the pancreas caused by bouts of pancreatitis, or a mixture of both.

Gestational diabetes can also occur during pregnancy, but usually goes away a few weeks after the baby is born.

Avoiding simple sugars is  recommended for everyone with FCS and this becomes more important if diabetes develops, as high blood glucose (also called blood sugar) is turned to fat in the body. Carbohydrates also raise glucose levels.  Eating smaller meals at regular intervals can help you manage FCS and diabetes together.

Having diabetes increases the symptom burden for people with FCS.  They are usually given drugs to manage their diabetes (depending on the severity), and many are given insulin.

Triglyceride levels rise naturally in the third trimester (6-9 months) which can lead to a higher risk of pancreatitis, dangerous to both the mother and her unborn child.

It is important that triglyceride levels are monitored closely during pregnancy and that close attention is paid to the diet.  If levels escalate to very high numbers some women are offered a procedure called plasmapherisis (it is not available in every area).  This is a process which extracts the blood from the patient, removes the excess fat, and then returns the 'cleaned' blood back into the body.  Although it can be useful for managing the risks of pregnancy, it is not considered a good way of managing the condition as it is a time-consuming procedure that does not offer lasting benefits.

Gestational Diabetes:  (see above) It is important that you are monitored regularly for diabetes.

Breastfeeding: Breast milk from a woman with FCS is unlikely to contain all the necessary nutrients for a growing baby.  It is recommended that breast milk is supplemented with bottle-feeds. It is, however, important to breast feed for the first three days because the breast milk contains colostrum, a source of valuable antibodies which can protect against early infections.

More in About FCS